Only a baseball purist would complain about the revamped PGE Park

By the Portland Tribune staff 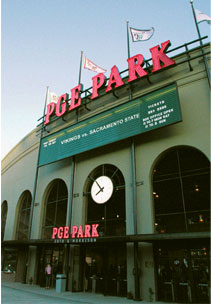 Eat your heart out, Ivana Trump; this is one face-lift with staying power! The Tribune team’s evening at the revamped PGE Park revealed a fresh-faced Field of Dreams for Portland. Our team of critics, fueled by a variety of ballpark fare, assessed the park. No plate went unturned: from hot dogs to hats, and turf to tunes.

We think you’ll find that whether you’re a first-time fan or a seasoned baseball nut, the park has something for everyone. They’ve built it, now you need to come.

Leading off: Getting there If you’ve lived in Portland for more than one week, you know the chances of parking around PGE Park are slim—even without a baseball game going on.

But any baseball ticket comes with free rides on Tri-Met all day. If you buy in advance, there is no cost for taking the bus to work, taking MAX or a bus up to the park after work, then riding a bus home. Games start at 6:30 p.m., so downtown workers can walk to the game.

Ride a bicycle? Hang it on the front of the bus to work, ride to the park and padlock it to a railing. Still, this is America and you want to drive, right? The first thing to know is, there is NO parking near PGE Park. West and north of the park are densely populated urban neighborhoods whose occupants lurk behind lace-curtained windows, waiting for a chance to move their cars two spaces closer to home. You don’t stand a chance. And if you park where you shouldn’t, add about $160 to the cost of your baseball ticket to pay for the towing.

If you must drive, consider downtown parking lots or street parking along Southwest 11th or 12th avenues, where business and residential density is significantly lower.

Perhaps you work in Beaverton or Gresham? Drive to the park-and-ride and use light rail.

In addition to planning his arrival, the wise fan also has an exit strategy. On the nights when there are big crowds, MAX trains are going to be full unless you want to leave before the end of the game. So consider adjourning to a nearby watering hole to argue the finer points of that error by the third baseman.

An hour after the game, you’ll be full and MAX will be empty.

Overall score:
Stand-up double—Paul Duchene Batting second: Ambience If Restoration Hardware built a ballpark, it would look like this!

Equal parts “The Natural” and Martha Stewart, the new PGE Park has a distinctly vintage feel. The stadium is done in a tasteful palette of sage and black, accented with forest green seats (plastic, but authentically styled).

Like any $38.5 million makeover, you get a little fake mixed in with the real. Key among the updates: NeXturf, the field’s artificial groundcover. The turf meets the criteria for a successful outdoor arena in Oregon: It cannot generate mud, and it provides a much-needed splash of color.

The musical portion of the ballpark experience is kitsch-perfect. Have you truly lived before hearing a cha-cha version of “King of the Road” on the organ? Adding to the fun: On-the-field gaffes and triumphs are met with the appropriate sound effect from the ivories.

A little disconcerting: the sight of aerobicizing Multnomah Athletic Club members in right field. (Membership has its privileges: The back of the club abuts the field). Ballpark insiders say this less-than-appealing vista is due for an upgrade via a powerwashing and mural painting treatment.

But overall, this minor league ballpark is big on style. And despite its vintage flair, there’s nothing old-fashioned about dining al fresco while supporting your city’s sporting culture. After all, everybody knows that flashy, overpriced soirees are so last year!

Overall score:
As good as a Rickey Henderson rookie card—Jill Spitznass Batting third: Concession stands At the tastefully renovated PGE Park, where aesthetics are as important as rah-rah in the stands, even the heat lamps warming pizzas are attractive. But then, the pizza being warmed is upmarket Pizzicato, not some greasy generic pies. And the beer flowing from taps is Widmer Hop Jack or Sweet Betty. The Polish sausage comes from Good Dog/Bad Dog, and the perfectly salty popcorn is popped on-site. Which is how it should be.

But the real value is that most of the eats actually taste good. Smoky hot dogs generally arrive hot. Pizza also is served up hot, with a winsome crust. The roasted peanuts are piping in the hand when they first appear in their comely brown paper bags. Jana’s Classic cookies stay soft and fresh well past the seventh-inning stretch. The grill at the Widmer bar alongside right field promises mildly sophisticated meats.

This is still ballpark food; it’s not going to knock your socks off. But it’s likely to be the most real-tasting stadium cuisine you’ve had in decades. Just steer clear of the gimmicky beaded ice cream. Pea-sized ice cream balls just don’t fit in with PGE Park’s genuine gestalt.

Overall score:
Batting .320—Christina Melander Batting fourth: The little fans I had a hot dog at the new ballpark, but they also have Pizzicato pizza, pretzels and peanuts. There are also menus at some of the seats. All you do is flag down a waiter, tell them what you want, and “vwala!”

We also met a nice guy named Tom, who’s a scout for the Houston Astros. We asked him to count the number of stalls in the boys’ room for us. (They have one more than the girls do.) The restrooms are heated just right.

The souvenirs look good! The shirts and vests only have a small logo—nothing too cheesy, except for the baby bibs and foam fingers.

I liked the look of the park; the Jantzen swimmer is very attractive. I think the scoreboard should be more technical (some guy changes the numbers himself), but my mom said they do that on purpose.

The music was great, too. Some Backstreet Boys and Christina Aguilera would liven things up, but I don’t think you can play it on the organ.

All in all, I think PGE stands for Pretty Great Evening. But that’s just my opinion. Check it out and form your own!

Overall score:
Home run!—Page Beukelman (age 9) Batting fifth: The die-hard fan There are three things that most interest a baseball fan while attending a game, and they come in this exact order: the game itself, food/drink and a large restroom. Attentive vendors are best, of course, especially if the game is a good one. As for liberating oneself of beer or other liquids, short lines are critical.

Considering the latter two, PGE Park’s first game, with 18,616 people flocking to the new version of the 75-year-old stadium, was a nightmare for the baseball-obsessed. Long lines led to half-hour waits for grub and/or libations and excruciating 10-minute delays for entrance into the tiny, three-urinal, two-stall men’s restrooms.

Ultimately, more time was spent on the concourses than watching the game.

Sellouts will be the exception, however, and normalcy returned Tuesday night, when only 3,041 showed up. There was time to saunter, watching the game from several different vantage points and soaking up the park’s new tableaus.

Some observations: Generally, it’s a great place to watch minor league baseball. Favorites are either in the Widmer Brothers area down the right-field line, where food, drink and the field-level viewpoint are the park’s best, or overlooking left field and center field, which offers a Safeco Field-like perspective but on a smaller scale.

The new seats are a little small, but OK; the old seats in the second level remain the same—benches with back supports. Obviously, money played a part in this decision, but in the long run new seats might have paid for themselves with increased attendance.

The scoreboard—and the quaint use of manpower over electricity—gives it a personality of its own. One complaint, however: placing the daily lineups on the scoreboard. Since they’re watching a real baseball game, fans want to see what’s happening in the majors, too. Give us scores, please.

The new carpet is no substitute for grass. The multipurpose nature of the park, weather and—once again—money undoubtedly killed the grass. But it is sorely missed by baseball purists. PFE should have at least installed dirt base paths.

Overall score:
Thrown out at home after tripping on the turf—Dennis Anstine