Our goal is a sellout at every game 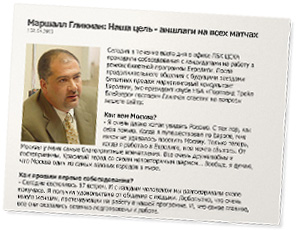 Over the course of the day today in the PBC CSKA offices, discussions were held with candidates to work within the Euroleague ticket program. After long conversations with future ticket sales stars, Marshall Glickman, Euroleague marketing consultant and ex-president of the NBA’s Portland Trail Blazers, answered questions for our site:

How do you like Moscow?
“I’ve wanted to see Russia for a long time. Ever since I can remember. When I traveled around Europe, I was never able to make it to Moscow. Only now that I work for the Euroleague has my dream come true. I have the best impressions of Moscow. Everyone is very friendly and hospitable. It’s a beautiful city with a distinct charm. In general, I think that Moscow is one of the most important cities in the world.”

How did the first round of discussions go?
“We had 17 meetings today, and we spoke about a half an hour with each person. It was nice talking to them. Interesting that there are lots of women vying for the position. And furthermore, they were all extremely well prepared to work.”

Will the ticket program take into account the specifics of our country?
“Of course! Our program is not a strict formula. There are certain principles that were successful in the United States, but that doesn’t mean that they will be successful in Russia. We have to work with Moscow. It has to have its own way here. We’re not planning to Americanize the ticket program, just like we’re not trying to Americanize the basketball. What’s more, I really like the European view of the game. Everywhere has to have its own approach. Every market is different.”

Could you talk about the biggest differences between the NBA ticket program and that of the Euroleague?
“There are 24 teams in the Euroleague, 13 countries, 15 languages, 13 cultures. Its own history, different economic situations. This is all very important for us to take into account. Regarding CSKA, you have a very recognizable and widespread brand. President Gomelsky is one of the greatest minds in the history of basketball. Believe me, everyone in the NBA knows who Gomelsky is. Your club has a great history. And it’s very important that it continues like that. Your general director is a person with the most cutting-edge approaches to basketball. And he knows perfectly well that basketball has to be managed as professionally as any business.”

How would you rate CSKA’s current marketing strategy?
“You have a lot of creative ideas and a desire to try out new things. I think that in that respect you’ve overtaken a lot of others on the continent. And I can use CSKA as an example for other clubs. That’s not just lip-service. I really believe that. And not just because I’m sitting in the CSKA offices. For me it’s very important that CSKA isn’t located in Western Europe. You’re the standard-bearer for many Eastern European countries, and that’s how it has to be.”

How long is the program set to last?
“As long as the Euroleague exists. We’re working on clubs, not the other way around. Our goal is a sellout at every game. I think it’s entirely realistic. Furthermore, European basketball is progressing each year.”