In a smart play, the Portland Trail Blazers executed the first nonrecourse financing of a sports facility. 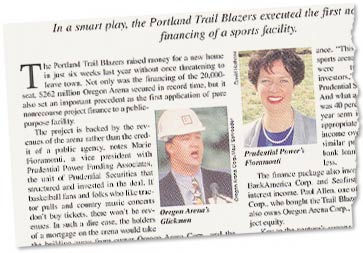 The Portland Trail Blazers raised money for a new home in just six weeks last year without once threatening to leave town. Not only was the financing of the 20,OOO-seat, $262 million Oregon Arena secured in record time, but it also set an important precedent as the first application of pure nonrecourse project finance to a public-purpose facility.

The project is backed by the revenues of the arena rather than the credit of a public agency, notes Marie Fioramonti, a vice president with Prudential Power Funding Associates, the unit of Prudential Securities that structured and invested in the deal. If basketball fans Oregon Arena’s and folks who like tractor pulls and Glickman country music concerts don’t buy tickets, there won’t be revenues. In such a dire case, the holders of a mortgage on the arena would take the building away from owner Oregon Arena Corp., and the other investors would have to swallow their losses. But for the most part, the public would not be on the hook.

The financing had five components. After quickly agreeing to build a new complex, the city committed to $34.5 million in road and site improvements. Portland should recoup its investment within six years through a 6 percent tax on tickets and a share of parking and rent revenues. In return it secured a 30-year commitment from the Blazers to remain in the city—a boon for basketball fans but also a $26 million annual economic boost for the area.

The bulk of the funds for the arena financing came from $155 million in 27-year, 8.99 percent first-mortgage notes rated investment-grade by Fitch Investors Service. Pru Power spoke for $70 million, with eight insurance companies taking the balance. “This was the first foray into a sports arena for the buyers, all of which were traditional cogeneration investors,” says Aaron Barman, a Prudential Securities managing director. And what a foray they made: The deal was 40 percent oversubscribed. The 27-year term is unusual for an arena but appropriate for a property that produces income over a long term; most recent similar projects are financed through bank loans with terms of 10 years or less.

The finance package also involves a $16 million loan from BankAmerica Corp. and Seafirst Corp. and $10.3 million in interest income. Paul Allen, one of the co-founders of Microsoft Corp., who bought the Trail Blazers in 1988 for $77 million and also owns Oregon Arena Corp., is providing $46 million in project equity.

Key to the venture’s success was a recognition early on that the project was about entertainment as much as sports. “We made a heavy push for special sporting events like NCAA AlIStars and figure skating,” says OAC senior vice president Marshall Glickman. “But we also courted concert promoters.” The Blazers themselves have plenty of marketing know-how: They have been sold out every season since 1978.

Adjacent to the site is the Blazers’ former home, the 13,OOO-seat Memorial Coliseum. This arrangement provides for greater flexibility in scheduling events. So while basketball fans look forward to completion of the new arena in time for the 1995-1996 NBA season, OAC and city officials see larger opportunities. An Olympics for Portland? Laughs Glickman, “A definite possibility down the line.”